To the Dead Heroes of the Revolution, 2018

The monument to Rosa Luxemburg and Karl Liebknecht, very forceful and formally and politically effective, became a meeting point for the German radical left. To reinforce its political function, beyond the metaphor of the volumes of used factory adobe bricks, Mies van der Rohe also designed a series of elements of normal communist political symbology: a large steel five-pointed star with a hammer and sickle in its centre and a pole on which to hoist the Red Flag on major occasions.

The star measured two metres and eighty centimetres across and a small manufacturer could not be commissioned to make it and thus Mies van der Rohe commissioned the Krupp steelworks. The Krupps, a major German industrial dynasty later known for their collaboration with Nazism and the use of slave labour during the Second World War, refused to supply a communist symbol. Faced with this refusal, the architect ordered five pieces of diamond-shaped steel, five pieces divested of any political significance, which Krupp agreed to supply. Once they had been assembled, they became the five-pointed star which presided over the monument until it was taken down by the Nazis and exhibited in a museum of insignia and flags which had been confiscated from enemies.

The Den toten Helden der Revolution piece (To the Dead Heroes of the Revolution, 2018) recreates this prior moment of impasse, in which five silent geometric shapes, at rest, can unleash their capacity for political activism. 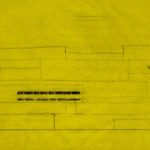 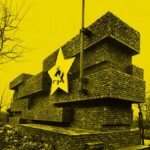 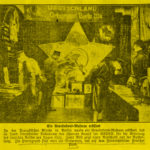 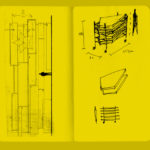 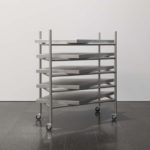 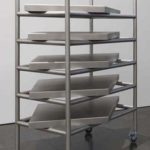 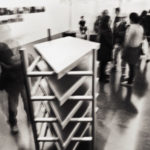